You Don't Need a CRM! An incredibly simple and efficient web based software to help your sales teamstrack to track and close their deals without spending hours filling out forms. 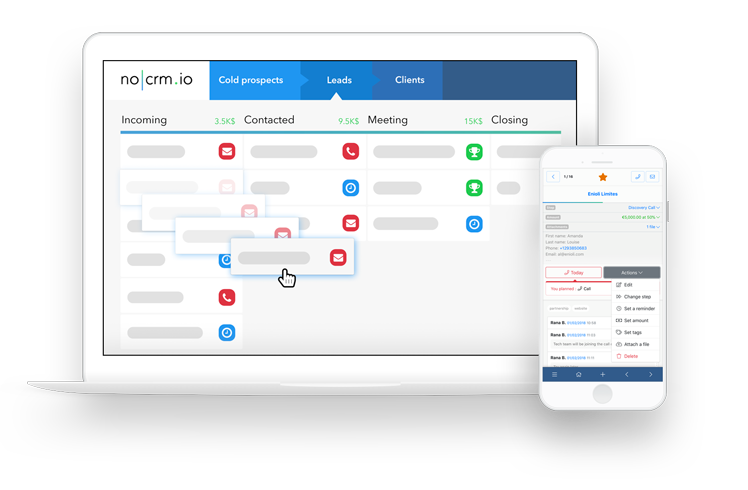 No: Use one of the no-code apps available that provide a code-free, visual environment to create smarter workflows and automate processes.

Yes: Then you can also use the API to build your processes and add in no-code apps to enrich and simplify your custom solution.

An automation platform that allows users to automate repetitive tasks between their different apps through a visual web interface.

Users can create custom workflows known as "zaps", each composed of one Trigger event that kicks off one or a series of Actions. With more than 3000 apps supported in Zapier, you can integrate many tools in your tech stack to create your ideal automation.

Zapier uses two main concepts: Trigger and Action to start and complete your workflow, but you can further enrich your commands with Filters; Add conditions to your database before launching your automation.

Example: A zap might be set up to create a new row on a Google Sheet (Action) for every new Trello card added to the board of your choice (Trigger), only if it doesn't already exist in your Google Sheet (filter).

Pricing: Zapier offers 5 plans including a free one. Paid plans start at $19.99 USD.

An advanced integration platform with powerful features for passing data between apps and automating manual processes. While it's a no-code automation tool, it also allows for simple programming.

Similar to Zapier, Make allows "If this happens... do this" operations. Users choose the Trigger event to deploy their automation workflows known as "Scenarios", and add more modules such as filters, functions, and Actions.

Example: Set up a scenario to add new leads in noCRM.io for every Google Sheet row, old and new, and communicate the lead addition internally in Slack.

Pricing: Make offers 6 plans including a free one. Paid plans start at $9 USD.

Additionally to those two apps, noCRM has developed several tools to customize your interface and allow you to integrate with third-party apps. You can easily add a lead widget with data coming from third-party apps, integrate forms, and add personalized actions that trigger events outside of noCRM. You can create simple event-based notifications that are sent by email or use our webhooks and API to build more complex stuff (but as mentioned before, this requires a bit of coding knowledge).